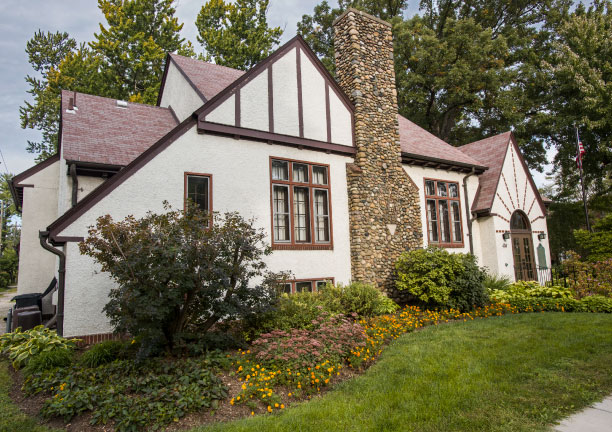 The History of Our Club

On November 8, 1902, fourteen Royal Oak women gathered together at the home of Mrs. Frances Lathrup Martin for the purpose of forming a study club to be named the Royal Oak Woman’s Club. A Constitution and Bylaws were drawn up and Mrs. Martin was elected the first president. (Mrs. Martin was in office only three months when she was tragically killed by a train at the railroad crossing at Fourth Street).

The History of Our Building

In 1922, the women of the Royal Oak Woman's Club who had been meeting in various locations decided they needed a larger, more permanent place to meet. After looking into this matter, the women accepted an offer to acquire one of the oldest buildings in town with the understanding that it be used as a clubhouse and to preserve the building as an important part of Royal Oak history. The catch was it had to be moved immediately.

The building, built in 1839 as the first Baptist church, then used by various other church organizations, was the first village town hall and at the time was the current city town hall. The stucture was moved in 1923 to its first clubhouse site on Lafayette Street on land donated by George Martin in honor of his wife, the first club president. (The 100 foot frontage was also an historical spot for it was here a blockhouse stood guarding a portion of the old Indian Trail from Detroit to Saginaw.)

Five years later, the building was moved again to its present location at Pleasant and Fourth Street. At the time, a $20,00 mortgage was obtained (and paid off ten years later). The building was remodeled as a Tudor-style structure and a cobblestone fireplace was installed. The old hand-hewn beams in the dining room are a reminder of its historical significance. In 1979, the building was designated a Michigan Registered Historical Site and marked in 1985 as such. In 1999, it was designated a Royal Oak Historic District. It is the jewel of the city of Royal Oak as it is the oldest building in the city and it is the pride and joy of the Royal Oak Woman’s Club. Much effort has been made over the years to keep the “charge” given so long ago. To this day, the city, the public and many organizations use the clubhouse for their meetings.

Written as a prayer in 1904, the General Federation of Women’s Clubs was the first women’s organization to use and print the Collect.

Keep us, O God, from pettiness; let us be
large in thought, in word, in deed. Let us
be done with fault-finding and leave off
self-seeking.

May we put away all pretense and meet each
other face to face -- without self-pity and
without prejudice.

May we never be hasty in judgment and always
generous. Let us take time for all things;
make us grow calm, serene, gentle.

Teach us to put into action our better
impulses, straight-forward and unafraid.

Grant that we may realize it is the little
things that create differences; that in the
big things of life we are at one.

And may we strive to touch and to know the
great common human heart of us all, and, O
Lord God, let us remember to be kind.